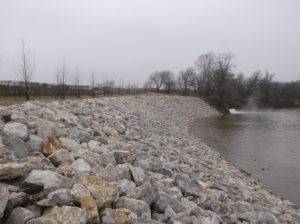 For the Bird Creek Bank Stabilization along the NSWWTP Sewage Lagoons project, we received a Project of the Year Gold award in the Environment division. This project stabilized the west bank of Bird Creek where it converges with Mingo Creek. At this location, Bird Creek runs next to a sewage lagoon at the City of Tulsa (COT) Northside Wastewater Treatment Plant. The bank had been eroding for several years, and COT became concerned that Bird Creek could be exposed to raw sewage from the wastewater treatment facility. Before a critical event occurred, the COT wanted to pre-empt the erosion and stabilize the bank. GUY’s design used longitudinal peaked stone toe protection placed to mimic the stream bank as viewed in historic aerial photos. This method, which was unfamiliar to COT reviewers and local contractors, used “sacrificial” riprap material that stops the degradation of the riprap toe.  As natural scouring occurs along the toe, the additional stone in the peaked area replaces and stabilizes the scoured area, reducing the chances of riprap failures. Riprap was placed from the key-in area to the toe of the existing bank.  To provide further protection, 35 sycamore trees were planted in the area between the top of the riprap and the bottom of the protective berm along the sewage lagoon. 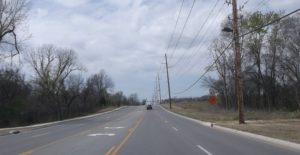 For our Tucson Street project, GUY received a Project of the Year Gold award in the Transportation division. This project widened approximately 1.0 miles of arterial road from two lanes to five lanes. It also included a major creek crossing upgrade and water line system improvements. An east-west roadway located in the southern part of Broken Arrow along the south loop of the Creek Turnpike, Tucson Street needed to be widened in order to accommodate heavier traffic expected after new retail outlets and the Warren Theater opened. GUY developed a cost-effective design that met the City of Broken Arrow’s needs by minimizing right-of-way acquisition and not requiring relocation of electrical transmission poles. In addition, the design incorporated principles of value engineering by simplifying additional widening that may be needed in the future. With the successful completion of this project, Tucson Street is now ready to handle the future growth of this rapidly developing area of Broken Arrow.

Congratulations to the GUY team!