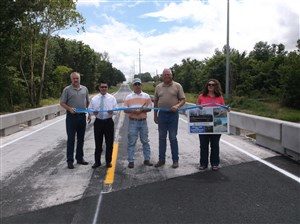 The two bridges were replaced as part of a $2.9 million project that also overlaid 3.9 miles of Old US-64 and added safety features that included gravel shoulder, guardrail, and new striping.

Funding for this project was provided by County Improvements for Roads and Bridges (state funding).