GUY’s first ribbon cutting of 2017 was held for Bridge #29 Stepps Ford over the Neosho River on January 19 at 9:00 am. This Ottawa County District 1 bridge is the only Neosho River crossing from Miami to the Kansas state line.

The old Stepps Ford Bridge was a two-span w 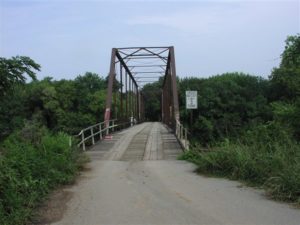 ooden plank single-lane, steel truss bridge built in 1901. It had 2-156 foot high truss spans with 4-18 foot approach spans. This historic bridge was Oklahoma’s first toll bridge, originally crossing the Neosho River on Main Street in Miami. However, it was purchased by Ottawa County in the 1920s and moved to its current location 7 miles west of Commerce on East 60 Road. It had been closed since 2013 because of safety issues.

The new bridge was designed by Guy Engineering Services of Tulsa, OK and constructed by A.M. Cohron & Son of Atlantic, IA. A multi-span PC beam bridge, it is 32 feet wide and 740 feet long. It was constructed on a safer alignment that eliminates curves and improves the sight distance.

The new bridge will improve safety and accessibility for drivers in Ottawa County. It will also improve response time for emergency personnel. Emergency vehicles couldn’t cross the old bridge because of its 3-ton weight limit.

Funding for the $6 million bridge was provided by County Improvements for Roads and Bridges (state funding) and by federal funding for large county road and bridge improvement projects.